Allow me to get this out of the way, right off the bat. I am not a wine-drinker. It isn't that I dislike wine.  It's more that I have what some would call a "beer-tooth."  So generally, if I'm at a restaurant or a pub, and I'm picking a drink (I usually get to pick only one, since I also have what some would call, a "beer-belly") I'll make it something cold, fizzy and served in as large a glass as possible. Even when it comes to beer, I'm not exactly a connoisseur.  Though I deeply appreciate the craft-beer revolution happening around us, since it means I can have a new draught beer with my wife and claim "experimentation," as an excuse for the calories, I'm not very picky when it comes to things I like and don't like. I'm not crazy about IPA's that taste like you're licking dandelion stems. Other than that, I'm easy to please.  My go-to beer, which I'm sure would be cause for great shame, were I capable of that emotion, is an American brand of light beer (slogan - "Crafted from Ingredients, Guaranteed!").

So when extremely talented Liftoff Capital entrepreneur, Henry Yates, began getting his product (Enso Beverage Co - wine that comes in cans) sold in the NB Liquor stores this past weekend, my thoughts were as follows:

I decided that if I didn't like the wine, I would just politely keep putting Henry off until an actual reviewer wrote a positive review of his product, and would then share that much better-educated article with our friends on social media.

On Friday night, after a long day of work and a long evening of meetings, I trundled into the NB Liquor store nearest my house, and picked up three cans of Warrior Chardonnay. 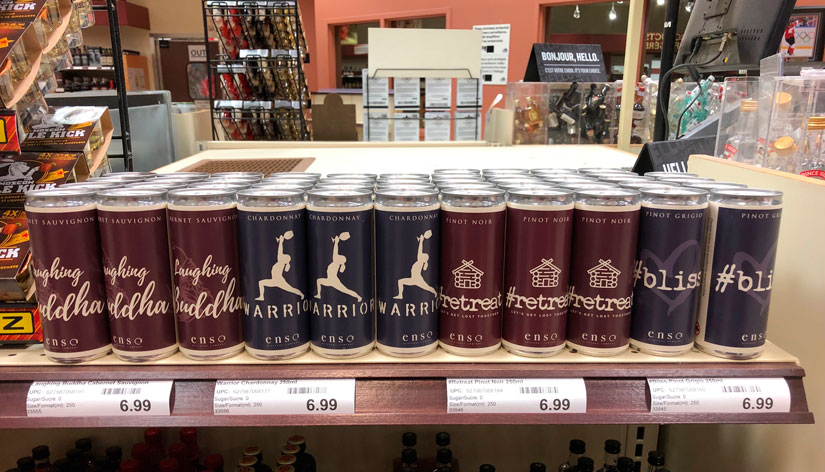 Upon arriving home, I put two cans in the fridge to chill, because frankly, I couldn't remember whether or not you're supposed to chill Chardonnay, and I opened the third can and poured it into a wine glass that I had received as a Christmas present. The glass had last been used as a makeshift bowl, to serve myself breakfast cereal in front of the television when my wife was out of town, and I was too lazy…er… busy to empty the dishwasher.

Now, I believe the point has already been driven home that I know nothing about wine. You may be surprised, however, to discover that I have, in fact, taken an amateur sommelier course, over a four-hour period, one afternoon in Napa Valley. I had been visiting my father, who worked in San Francisco at the time, and it seemed like something to do to challenge my comfort zone (because I didn't know very much about wine), without actually challenging anything at all (because it entailed sitting around drinking wine all afternoon).  My course partner was my mother.  What I remember best about the course was that we both refused to spit out the "product" during the many tasting sessions, and when a fellow (much more serious) would-be sommelier suggested that his Pinot Noir exemplified "…Fine gradations of pepper, hummus and brown bread," mom and I nearly split our sides laughing.  We were asked, at that juncture, to leave the vineyard.

My point, though, isn't that wine tasting is snobbish and ridiculous (it is), rather that I'm not a complete idiot when it comes to appreciating a good wine.

Right away, I had a feeling that the Enso Warrior was a lovely Chardonnay.  Light yellow in colour, the aromas of fruit (don't ask me what kind of fruit) jump out of the glass.  In sniffing the wine ("appreciating the nose," in San Francisco wine-snob-speak), I was asking myself "Does this smell like an aluminum can?"  The answer, of course, is "no."

The Chardonnay is bold and ever-so-slightly tart on the tip of the tongue, before easing into a buttery smoothness much like some of my favourite Australian whites, from years gone by when my not-so-protuberant-beer-belly allowed me to experiment with different wines.  Warrior is easy to drink, but complex and interesting.

My wife, who happened to be drinking a bottle of good Australian Chardonnay when I arrived home with my three prized cans of Enso, noted that, served side by side, she would be unable to distinguish which wine was served from a can.

And that's essentially my take on the wine itself.  It's good.  I'd drink it in a bar. I might even bypass the beer, and pair it with white fish or chicken if I could pull myself away from the side of the menu that moo's and chews it cud. I like that Enso comes in a can.  I like that there's a picture of a woman doing the warrior pose on the label.  Does that mean I'm not manly?  I don't know.  But this wine, and its presentation both appeal to me.

And that brings me to my next point. Enso wine is practical!

I often find myself in establishments that are not necessarily renowned for their classiness. One bar in particular, is celebrated more for having no recent stabbing incidents than it is for its selection of bottles.  I would guess that bars like these might serve a glass of Chardonnay about once every six months.  So how do they prevent their open bottle from being wasted?  Well, clearly, Henry Yates has the answer.

Similarly, there's an inherent practicality of single-serving wine in a can for home use.  If, like me, you don't consider yourself to be a "quitter," then you, too, are likely familiar with the painful morning headache earned after a night of "not letting any wine go to waste."  Well Henry has an answer for that problem too.

In the end, whether you're a wine drinker, a beer drinker, or both, I would urge you to give Enso Beverage Company's wines a try.  Just don't ask me about the gradations of brown bread. 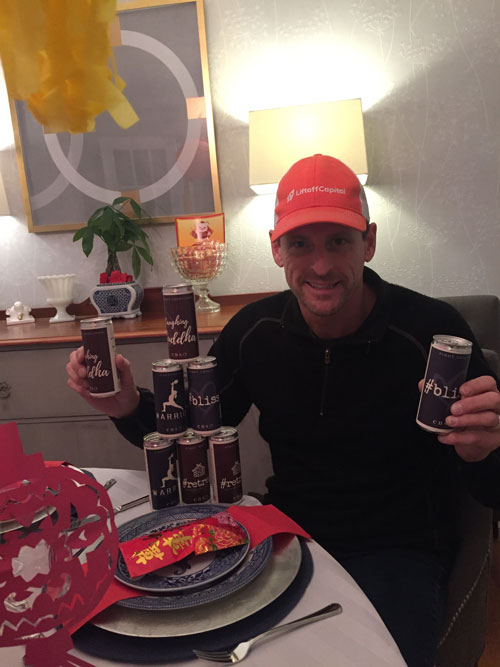 Other posts
NB Business Leads the Way in Home Care Solutions "The industry has failed to innovate. Right now, there is no way to be sure our seniors are receiving good quality care" - says operator with over 200+ clients in home.
2392
Home Care Solutions Startups Investment Opportunity Liftoff Capital Entrepreneurs Startups in Canada 2021
How do I Jazz Up my Business's Web Presence? Some tricks for attracting eyeballs to your company.
1580
Growing a Business
Henry Yates, CEO of Enso Beverage Company, Answers Five Questions Breaking with tradition, Henry Yates, one of our Liftoff Capital entrepreneurs, realized there was an unexploited market niche for single servings of wine. We asked him five questions about his business.
3006
Investment Opportunity Liftoff Capital Entrepreneurs Startups in Canada 2021